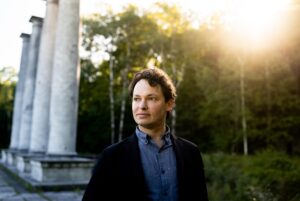 A glimpse at the structural, historical anti-Semitism in the former USSR; Kutik’s family decides to leave the Soviet Union in search of a better life; an introduction to the ‘music’ from the suitcase. Featuring Achron’s Hebrew Melody, Shostakovich’s Sonata No. 2, and Stravinsky’s Divertimento from a Fairy’s Kiss.

A look at the strange and stateless journey through Europe which millions of Soviet emigres undertook to start a new life; applying for asylum; an awful recollection from the USSR. Featuring Tchaikovsky’s Swan Lake, Khachaturian’s Nocturne, and Bloch’s Baal Shem.

Kutik’s family arrives in the United States; a closer look at rebuilding everything from nothing; the incredible power of community and selflessness. Featuring Rubinstein’s Romance, Achron’s Hebrew Lullaby, Shostakovich’s Romance from Ovod, Prokofiev’s Waltz from Cinderella, and Sviridov’s Children’s Album.

A tribute to the teachers and influences who helped Kutik and his family grow and build; remembering Zinaida Gilels and Roman Totenberg. Featuring Prokofiev’s Sonata No. 2 Op. 94a, and Darius Milhaud’s Le Beouf sur le toit.

Reflecting on Kutik’s family journey, one small journey among millions; a musical tribute of thanks to his community. Featuring Rachmaninov’s Vocalise and Franck’s Sonata.